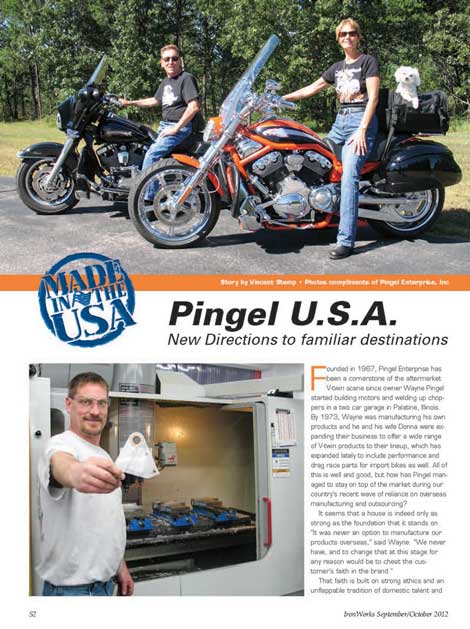 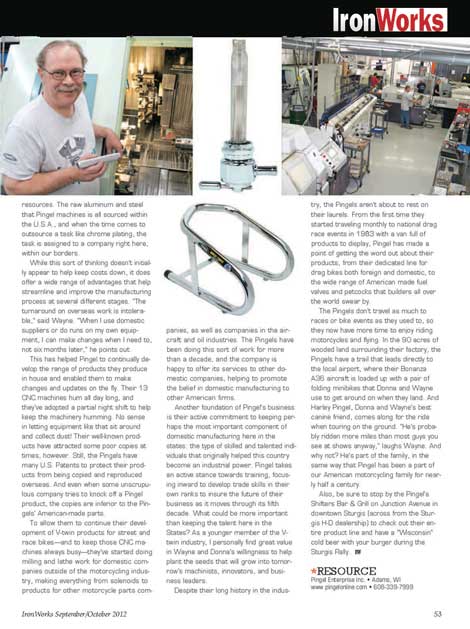 Founded in 1967, Pingel Enterprise has been a cornerstone of the aftermarket V-­twin scene since owner Wayne Pingel started building motors and welding up chop­pers in a two car garage in Palatine, Illinois. By 1973, Wayne was manufacturing his own products and he and his wife Donna were ex­panding their business to offer a wide range of V-­twin products to their lineup, which has expanded lately to include performance and drag race parts for import bikes as well. All of this is well and good, but how has Pingel man­aged to stay on top of the market during our country’s recent wave of reliance on overseas manufacturing and outsourcing?

"It was never an option to manufacture our products overseas," said Wayne. “We never have, and to change that at this stage for any reason would be to cheat the cus­tomer’s faith in the brand."

That faith is built on strong ethics and an unflappable tradition of domestic talent and resources. The raw aluminum and steel that Pingel machines is all sourced within the U.S.A., and when the time comes to outsource a task like chrome plating, the task is assigned to a company right here, within our borders.

While this sort of thinking doesn’t initial­ly appear to help keep costs down, it does offer a wide range of advantages that help streamline and improve the manufacturing process at several different stages. “The turnaround on overseas work is intolera­ble,” said Wayne. "When I use domestic suppliers or do runs on my own equip­ment, I can make changes when I need to, not six months later," he points out.

This has helped Pingel to continually de­velop the range of products they produce in house and enabled them to make changes and updates on the fly. Their 13 CNC machines hum all day long, and they’ve adopted a partial night shift to help keep the machinery humming. No sense in letting equipment like that sit around and collect dust! Their well­known prod­ucts have attracted some poor copies at times, however. Still, the Pingels have many U.S. Patents to protect their prod­ucts from being copied and reproduced overseas. And even when some unscrupu­lous company tries to knock off a Pingel product, the copies are inferior to the Pin­gels’ American­made parts.

To allow them to continue their devel­opment of V­twin products for street and race bikes—and to keep those CNC ma­chines always busy—they’ve started doing milling and lathe work for domestic com­panies outside of the motorcycling indus­try, making everything from solenoids to products for other motorcycle parts com­panies, as well as companies in the air­craft and oil industries. The Pingels have been doing this sort of work for more than a decade, and the company is happy to offer its services to other do­mestic companies, helping to promote the belief in domestic manufacturing to other American firms. Another foundation of Pingel’s business is their active commitment to keeping per­haps the most important component of domestic manufacturing here in the states: the type of skilled and talented indi­viduals that originally helped this country become an industrial power. Pingel takes anactive stance towards training, focus­ing inward to develop trade skills in their own ranks to insure the future of their business as it moves through its fifth decade. What could be more important than keeping the talent here in the States? As a younger member of the V­twin industry, I personally find great value in Wayne and Donna’s willingness to help plant the seeds that will grow into tomor­row’s machinists, innovators, and business leaders.

Despite their long history in the indus­try, the Pingels aren’t about to rest on their laurels. From the first time they started traveling monthly to national drag race events in 1983 with a van full of products to display, Pingel has made a point of getting the word out about their products, from their dedicated line for drag bikes both foreign and domestic, to the wide range of American made fuel valves and petcocks that builders all over the world swear by.

The Pingels don’t travel as much to races or bike events as they used to, so they now have more time to enjoy riding motorcycles and flying. In the 90 acres of wooded land surrounding their factory, the Pingels have a trail that leads directly to the local airport, where their Bonanza A36 aircraft is loaded up with a pair of folding minibikes that Donna and Wayne use to get around on when they land. And Harley Pingel, Donna and Wayne’s best canine friend, comes along for the ride when touring on the ground. “He’s proba­bly ridden more miles than most guys you see at shows anyway,” laughs Wayne. And why not? He’s part of the family, in the same way that Pingel has been a part of our American motorcycling family for near­ly half a century.

Also, be sure to stop by the Pingel’s Shifters Bar & Grill on Junction Avenue in downtown Sturgis (across from the Sturgis H­D dealership) to check out their en­tire product line and have a “Wisconsin” cold beer with your burger during the Sturgis Rally.